The average price for a barbecue grill is the highest it has been in two years, because Czechs have moved from coal grills to electric grills.

The switch from conventional charcoal barbecue grills to electric grills, the willingness to pay more money for the product, and a 23% year-on-year increase in sales over last year's record year: this is the current state of the barbecue grill category on the internet. Shopping advisor Heureka from the price comparison group Heureka Group presents another detailed analysis of customer behaviour, this time on the current topic of barbecues.

Barbecue grill sales broke records last year, with April being the strongest month in the last two years. Despite this, barbecue grill sales are now still 23% above last year. „We are talking about a very strong start to 2021, taking into account a comparison with last year’s records and the fact that good weather, which benefits the sale of this kind of equipment, came only a few weeks ago,“ says Michal Buzek, head of analysis at shopping advisor Heureka.cz. Last year, hot weather came to the Czech Republic almost from the start of April, while this year, we had to wait until the end of May.

Barbecue grills won the battle with last year's records in other countries, but not in Slovenia, where sales did not fare as well.

However, sales of barbecue grills did not only grow in the Czech Republic. In Slovakia, for example, they were even more successful, with a year-on-year growth of 62%. Barbecue grills also saw growth in Croatia (+24%). In Hungary, sales are at a similar level to last year (+5%), but Slovenia has seen a year-on-year decrease of 14%. „Even in Slovenia, last spring was extreme in terms sales of barbecue grills. In addition, high-street stores opened here sooner than in our country, which is why there was a slight decrease in the first four months,“ explains Buzek. 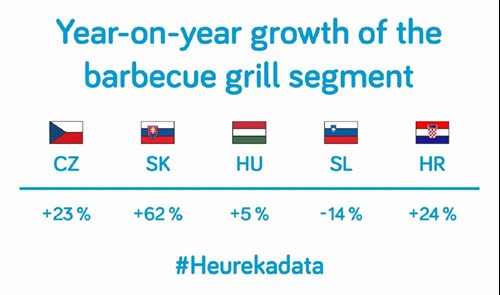 But generally, the barbecue phenomenon has been popular across the whole of Europe, reinforced by lockdowns during which people devised different ways to spend their time at home. The flavours and composition of what is tossed onto the barbecue in each country are also similar. In the Czech Republic, we like to put chops on the grill, while the Slovaks tend to go for meat and vegetables wrapped in foil or on skewers. On the Slovenian barbecue, we often find some kind of fish, and in Hungary, sausages are never missing. In all countries, people love to experiment with cheeses and vegetables.

The average price for a barbecue grill is the highest it has been for two years, growing on average by 1500 crowns. 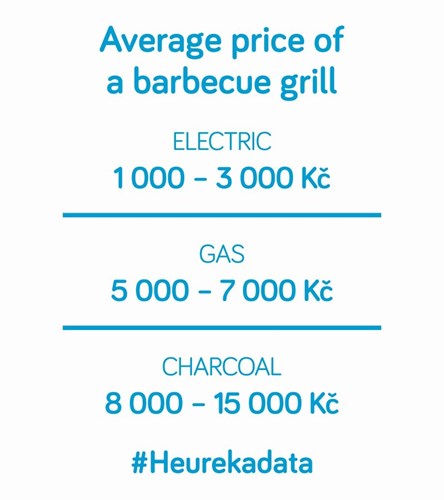 Czech barbecues are dominated by electric and gas grills; charcoal is simply not practical.

„Electric grills are clearly in the lead, accounting for 43% of all barbecue grills sold. Of course, behind everything is practicality and a lower price,“ says Buzek. Electric grills can have grill plates made of different materials, but all of them are easy to maintain, so they are the most popular not just because of the price but also because they are easy to store and can be cleaned quickly. „The average price of an electric grill fluctuates between one to three thousand crowns.“

The second most popular are gas grills, which account for 33% of all barbecue grill sales. „A gas grill is practical on the other hand when people have a place where they barbecue regularly but don’t have much time to prepare and warm up the grill. Because these grills are larger, they are more expensive,“ says Buzek. The average price of a gas grill starts at five thousand crowns, but it is no exception to find a gas grill selling for fifteen or twenty thousand. According to Buzek, gas grills are often used by restaurants.

Back in third place are the ’classic’ charcoal grills, with a 12% proportion of sales. These are the most suitable for gardens and for all the gourmets who enjoy the rituals associated with lighting the charcoal and holding a barbecue in the ’classic’ style. „The average price of a charcoal grill depends very much on its size – there are small portable grills which cost around a few hundred crowns, but there are also larger ones for several thousand crowns,“ says Buzek. The remainder are made up of other types of grills, such as contact, table, combination and others.

Although customers most often decide what to buy based on the type of barbecue grill, the grill material and the price, it also depends on the weather or the season when they buy it. „With the arrival of spring and warmer days, Czech people are rushing to buy garden classics – gas grills, and to a lesser extent, charcoal barbecue grills are on the rise. When winter comes, we hide in the home with grills, so we buy electric or table-top grills.“ 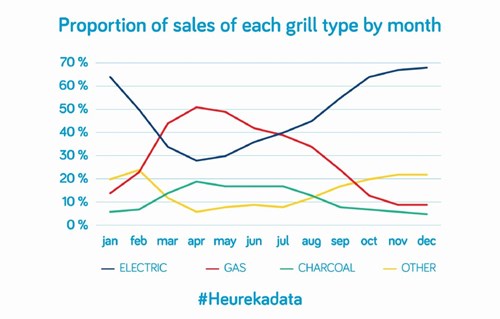 The most popular brands of grill among Czech customers are Tefal, Weber and Char-broil. „The top 5 grill brands in the Czech Republic account for 55% of the market,“ says Buzek. 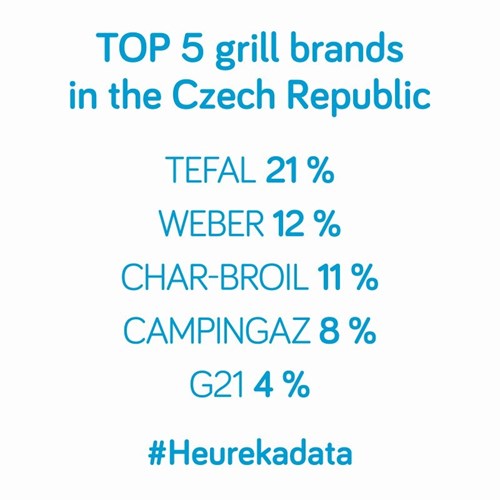 The head of BI department for Heureka Group Michal Buzek spoke at the E‑Commerce Summit 2021. He talked about data that played a major role in the past covid year. Play the recording of the speech and…

The popularity of watches that show more than just the time is rising. „Wearable technology“ grew 86% year-on-year and took almost 5% of the revenue for electronics

8 April 2021 – Watches that show far more than just the time. They are a growing trend in recent years. Wearable technology, the overarching term for smart watches, smart bands and accessories, grew 8…

In March, bicycles broke records on the internet, selling 428% more than last year. For all of last year, it was 68% year-on-year.

In the past few months, this widespread pastime has become a genuine phenomenon – the demand for bicycles on the internet has grown enormously in recent months. Due to the delay of component deliverie…