In March, bicycles broke records on the internet, selling 428% more than last year. For all of last year, it was 68% year-on-year.

In the past few months, this widespread pastime has become a genuine phenomenon – the demand for bicycles on the internet has grown enormously in recent months. Due to the delay of component deliveries, rumours of a shortage are starting to spread across the market, and figures from shopping advisor Heureka.cz indicate that people are taking e‑shops with these goods by storm. „The entire cycling segment in general is growing on the internet, by 230% year-on-year in March. Bicycles themselves are naturally at the forefront of interest, which actually increased by 428% in March. Helmets have grown more than sixfold, kickbikes and scooters almost threefold,“ said Michal Buzek, Chief Analyst for the shopping advisor Heureka.cz. Heureka is part of Heureka Group, a group of price-comparison sites in Central and Eastern Europe, and offers a detailed analysis of the bicycle and cycling gear segment. 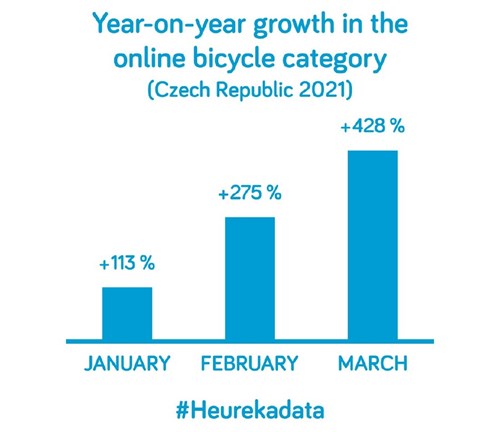 The significant growth seen in March is due to the fact that last March, Czechia „froze up“ during the first wave of the lockdown, and no thought was given to buying bicycles. However, the consistent rise in figures all year indicates that over the course of the year, cycling became one of the top sports in the Czech Republic. Interest in bicycles increased substantially throughout last year, reaching 68% year-on-year in the past year. „The biggest jumps in demand traced the periods when people were obliged to stay at home – meaning the first spring and second autumn lockdown,“ explained Michal Buzek from Heureka, adding: „We’ve seen increased demand for bicycles not only in Czechia, but also in other countries – in Slovakia bikes grew by 65% last year, and in Hungary by 61%.“

Some bicycle manufactures have seen signs that this situation could continue. „This year, the shortages and delays are and will be bigger. This is due mainly to the immense demand, large orders and the situation in Asia. Many manufacturers and suppliers are still catching up on delays from the last season, primarily because of the lockdown in some countries,“ says Tomáš Tóth, Product and Marketing Manager for CTM.

„Mountain“ and „cross-country“, classics among Czechs

Interest among Czech cyclists is consistently high with respect to mountain bikes (66% of searches), followed by cross-country bikes (18%) and road bikes (10%). „Customers in Czechia can choose from a vast range of brands, so they mainly focus on the bike’s price and features when choosing. The market is relatively differentiated here and the brand does not play such an important role in making a decision,“ explains Michal Buzek. The top 5 bicycle brands in the Czech Republic hold a share of around 30%. For comparison, on the smart watch market the top 5 brands hold a share of up to 80%.

The popularity of mountain bikes among Czechs is also confirmed by Stanislav Jakeš, Marketing and PR Manager for Pells: „Mountain bikes have been the most popular category among our customers for years, which is why we offer the greatest range of those. The demand for e‑bikes is also growing consistently, because they help the older generation rediscover the joy of cycling.“

E-bike sales have also grown year-on-year, noting a significant jump especially last spring during the first lockdown, when they increased much more than conventional bicycles. „Online e‑bike sales increased by 66% in all of last year. In March of this year, they sold 150% more than last year,“ explains Michal Buzek. On average, customers spent between CZK 23,000–35,000 to purchase an e‑bike online. The fact that this is an attractive category with significant potential is supported by the fact that online, e‑bikes account for 9% of revenues for the sports segment as a whole, evening out conventional bicycles in terms of volume. 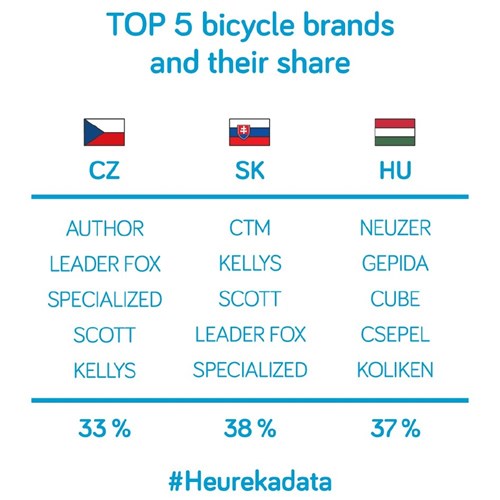 The price most often paid by Czechs who purchase a bicycle online evolves from the most popular type of bike. This price usually ranges between CZK 10,000 and 16,000. „Naturally, figures on the order of tens of thousands of crowns, reaching to one hundred thousand and beyond, are spent on cycling. However, if we look at the majority of the population who have partly taken to the bike saddle because of coronavirus, these figures are more modest,“ said Michal Buzek. However, parking bikes at home which are priced like a family car is no rarity. „The most expensive bicycle sold on the internet was worth a small car and cost more than CZK 300,000. And it wasn’t the only one,“ adds Buzek.

The average price in the bicycle category has increased by roughly half compared to last year. „Delays in deliveries and a shortage of spare parts, more expensive shipping and investments into better-equipped bicycles may be reflected in the rising prices,“ explains Michal Buzek. 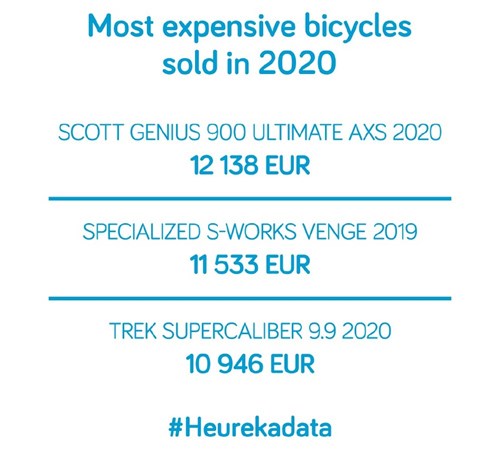 Martin Raufer, editor of the cycling magazine Velo, confirms that the market is reporting shortages and that growing prices are logical. „This year, massive outages in bicycle supplies are expected, and are actually already happening. Europe in particular will get only about 50% of all the bikes that it could use. Many bikes will arrive from Asia with massive delays, and further deliveries will likely be more and more expensive, meaning that the end prices for bicycles will gradually increase. For instance, transportation is ten to twelve times higher than last year, which is insane. Logically, this will be felt the most in the end prices of more affordable or children’s bikes.“

Bikes make up for a tenth of sports overall

Online shopping for bicycles and cycling gear in general has a lengthy tradition. Bicycles already make up a full tenth of the turnover of the entire sports segment. „Cycling involves not just bicycles; online shopping for cycling gear, from clothing and bike accessories to equipment and individual components, has a very lengthy tradition,“ says Michal Buzek. After conventional bicycles, people mainly shop online for e‑bikes, e‑kickbikes and kickbikes. As for accessories, these are mainly bicycle tyres, brakes, saddles and bike stands. 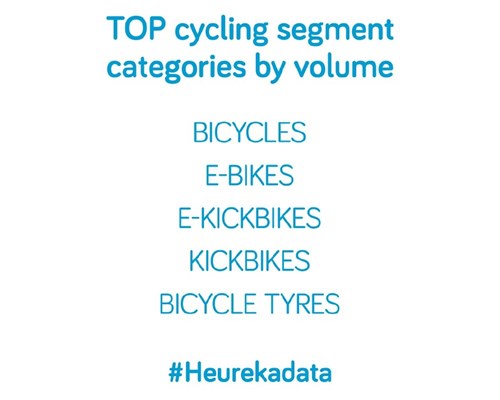 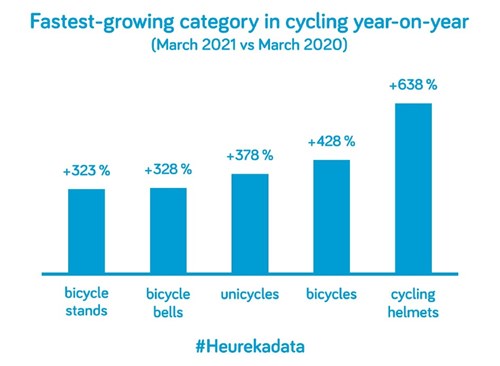 The head of BI department for Heureka Group Michal Buzek spoke at the E‑Commerce Summit 2021. He talked about data that played a major role in the past covid year. Play the recording of the speech and…

The popularity of watches that show more than just the time is rising. „Wearable technology“ grew 86% year-on-year and took almost 5% of the revenue for electronics

8 April 2021 – Watches that show far more than just the time. They are a growing trend in recent years. Wearable technology, the overarching term for smart watches, smart bands and accessories, grew 8…

How much do Slovenians put on the quality of products for their four-legged friends?

Spring presents pet owners with a season of purchasing pet care and health accessories. The warm months are inviting more frequent walks, which increases the likelihood of problems with internal or ex…